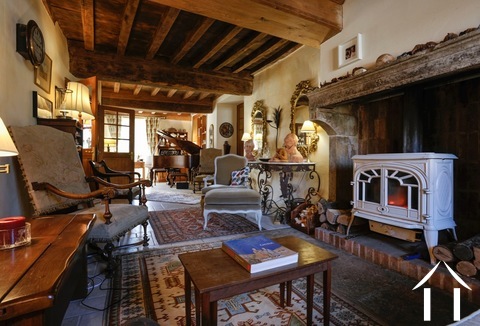 Introduction text
This former wine growers house has been transformed into a magnificent luxurious family house, in a quiet village of the hautes cotes de Beaune. Creot is just 5 minutes from Medieval Nolay and 30 minutes from Beaune the capital of the burgundy wines. Three barns provide more development potential.
View more

It is in very good condition, but still shows off its character features

It is situated in a quiet village, but near all the best what Burgundy has to give.

A large family can move straight in and enjoy the property, but it can also suit a person looking for extra income after some development.

It has a secluded, south facing garden.

The house is to the right, ahead the courtyard and outside sitting area, the the left the second garden.

Stone steps lead up to the living area as the house is raised above cellars.

The front door opens to the dining room. To its right is the fitted and equipped kitchen. Off the dining room is the cloakroom with toilet. to the left of the entrance, double doors open to the salon. Salon is large enough to have to one side a sitting area in front of the fire place with in an efficient JOTUL wood burner. On the other side a music area, holding a grand piano today.

At the far left of the Dining Hall access to the master suite developed in the first floor of the eastern tower. This is a private area separate from the rest of the other bedrooms on the west wing. The master bedroom is large with high ceilings. Part of there master suite is a dressing room and newly developed shower room with toilet. The master bedroom has for extra character a wood stove and beamed ceilings.

To the right of salon access to two rooms. The far end room, actually a bedroom, is today used as a study. The first room is used today as an art studio. These two rooms are joined by double doors, making it possible to make of this a large work area. The windows look on to the street and views of the vineyards surrounding the village.

A inner hallway with sitting area leads on to two other bedrooms and family bathroom. One of these bedrooms has a balcony looking on to the secluded garden.

Up some steps to the west wing, there is bedroom and shower room with toilet. The bedroom has a mezzanine in it, this mezzanine could count as the 6th bedroom.

The house is raised above clears and work shop area. Here also a brick Lacanche bread oven (actually under the present kitchen area). The boiler room is also under the house, but is accessed via the street.

In front of the house a garden with two areas: to the front the gazebo for shade and outside dining, behind a wall a play area to the east and a vegetable plot to the west.

The open barn across the courtyard is used today as a party area.

Attached to the house on the west is a barn used as a garage, with next to it work shop and extra storage area.

The garden area is walled and secure.

On the west side, but accessed via the street is the large barn with a 88m2 foot print. The owners park here 2 to 3 cars. This barn also has a large attic.

On the other side of the street is a small cute building with a 22m2 footprint.

The property is situated in the centre of this kind and quiet village of Créot. its 85 inhabitants are mainly occupied in the vineyards surrounding the village. Créot is sheltered a valley between the hills of Mont Rome and Mont Reme. It is part of the Saône-et-Loire department on the border of Côtes d’Or in the region of Bourgogne in eastern France. Shops and restaurants in Nolay. There are several markets in the area to visit, the best known are in Beaune, Chagny and Autun. Dijon city is at 75km. The TGV station of Le Creusot with fast connections to Paris (1h25) and Lyon (30min) is at just 30 minutes drive.

Ready to move character property, ideal for a large family 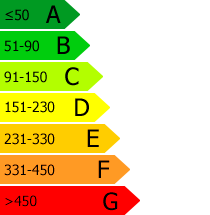 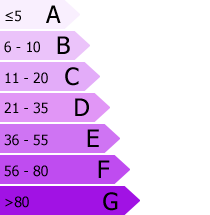 This historic town and the wine producing villages which surround Beaune need no introduction, and for the wine enthusiast, only a vineyard location will do.