Prices and availabilities in the Puisaye area

Half timbered houses made from local materials: wood from the forests, sandstone walls, clay for the bricks around the windows and the roof tiles, and warm, earthy ochre pigment – these are the characteristics of the Puisaye. Known by the French, it is an area that has only just started to be discovered by foreigners.

From Auxerre, to the west, the Puisaye’s main access is along the D965. Using this route, journey time from the Channel ports to St. Fargeau is about 5 hrs 30, either via Paris or Troyes, and 8 hrs from the Netherlands. It is a mere 2 hrs to the centre of Paris, and once on the A6/E15/A77, the main axis through Burgundy, there is excellent north/south accessibility. By air, Paris Charles de Gaulle airport is 2hrs 30 away by car and Paris Orly, 2 hrs. Laroche-Migennes has the best regional train connections to and from Paris. And the train Paris Gare de Lyon - St. Fargeau takes no more than 1hr .

Loire: change of sight
This area looks west to the Loire and it is quite different in character and feel to its neighbours the Yonne, Côte d’Or and Saône-et-Loire. The shape of the châteaux, the colour of the stone, even the grape variety grown to make the delicious dry white wine in this region is different – Sauvignon grapes replace Chardonnay.

The three main towns of La Charité-sur-Loire, Cosne-sur-Loire and Pouilly-sur-Loire grew up on what used to be a major river transport system, the mighty Loire river. With the construction of the canal, Canal Latéral à la Loire, the commercial traffic left the river and it was transformed. Today it is described as ‘the last wild river in western Europe’, a haven for wild life, especially birds. Meanwhile the Canal carries the cruisers and holiday traffic.

La Charité-sur-Loire
North of the regional capital Nevers, La Charité is a very pleasant medieval town and a designated UNESCO world heritage site. Much renovation work has been carried out on the Church of Notre Dame and the priory which lies at the heart of the town. This was one of Cluny’s very powerful offshoots; pilgrims have been coming here for centuries and due to its abounding charity, the town was renamed.
For some two hundred years the bridge across the Loire at La Charité was the only one between Nevers and Gien and so this fortified town commanded the trade route. You can walk up the Promenade des Remparts to get a good overview. Now the town has a peaceful air about it with its cobbled streets and antiquarian book sellers. A well known book fair is held each July here, and music festivals are staged in the summer.

Pouilly-sur-Loire
There’s 20 kms of nature reserve going northwards from La Charité to the much smaller town of Pouilly-sur-Loire. Here 190 species of bird have been spotted and it is home to numerous types of fish. So important is this wildlife habitat, that during the hunting season, bows and arrows are used instead of guns by those insatiable hunters of wild boar. Pouilly marks the midway point of the Loire from its rise to its fall, and the Pavillon, a centre at Quai Jules-Pabiot, provides good area information.
The delicious dry white wine, Pouilly Fumé and Blanc-Fumé, is produced here mainly from the Sauvignon grape. On the opposite side of the Loire is Sancerre, their arch wine rival. Sancerre is near enough for you to be able to enjoy its many facilities such a golf club, restaurants and numerous cultural activities.

Cosne-sur-Loire
The river Loire at Cosne is divided by islands and sand banks, and is an area of great interest to nature lovers. Cosne itself is a busy market town with the medieval ramparts at its centre. The town has had a tumultuous past suffering a siege during the Hundred Years War. It has seen the rise and fall of industry and trade, most notably it was famous for the ships’ anchors produced here. The town, the second largest in the Nièvre department, is on the edge of the Puisaye region so ceramics are high on the agenda. The surrounding countryside is gentle and unspoilt with pasture and meadow, woodland and streams.

The identity of the Puisaye is embedded in its soil. Beautiful countryside, unlike any other in Burgundy, there are meadows and orchards, streams and lakes, copses and marshes, and rich, rich clay soil. It is this clay which has been used for the acclaimed pottery, with kilns which were fired by wood from the forests. The pottery is mainly earthenware, that old friend, the everyday crockery used in farmhouse kitchens. Ochre was mined locally and exported as far as Russia for architecture, interiors, ceramics and cosmetics. In the Middle Ages it was the fashion to paint murals in churches; examples of some twenty still exist today in the Puisaye.

St. Fargeau
This is the main town in the region, dominated by the grand rose coloured brick château, and it is here in summer that a son-et-lumière spectacular is staged each weekend. Little children love the farm alongside the château which has been preserved to show rural life and the trades of the time over a hundred years ago with donkeys, chickens and goats.

Another reconstruction on a far grander scale is Guédelon, one of the must-see attractions in the whole of Burgundy. Here a medieval fort is being built by craftsmen over a 25 year period, without electricity, hewning the rock, building the horse drawn carts from scratch, and forging the iron.

Nature and Activity
The Parc Boutissaint is a wildlife park with deer, wild boar and European buffalo roaming in their natural habitat. Nature lovers will also enjoy the riding and fishing, walking and cycling on offer in the Puisaye. One of the best golf courses in Burgundy, Roncemay is in the north of the area near Aillant-sur-Tholon.

Famous pottery
With this pottery tradition, craftsmen from as far afield as Japan have come to the Puisaye, notably to Lain where Dauphine Scalbert runs international courses. Exhibitions are staged throughout the summer at the arts centre at Château de Ratilly, Toucy and Treigny, and other pottery villages of note are St-Armand-en-Puisaye, Charny, and Moutiers. Moutiers-en-Puisaye deserves a special mention. In the little church you can see some of the wall murals using the ochre dye.

Colette
And so to Colette, who was born in St-Sauveur-en-Puisaye. There is a museum there to introduce you to, what was considered in those days, her avant-garde and risqué life. No one can match her descriptions of the French countryside, formulated here in the Puisaye amidst the craftsmen, the earth and the sky. 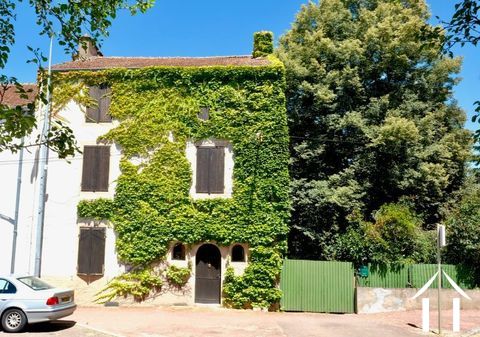 Building to be renovated, for professional or personal use 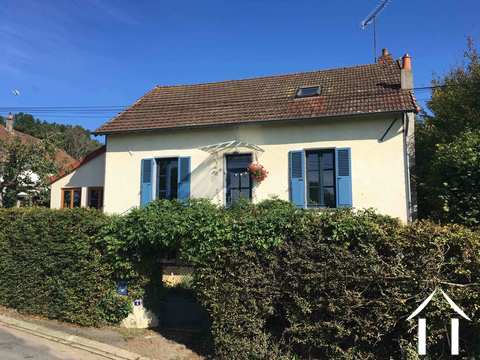 Renovated house in the Morvan region 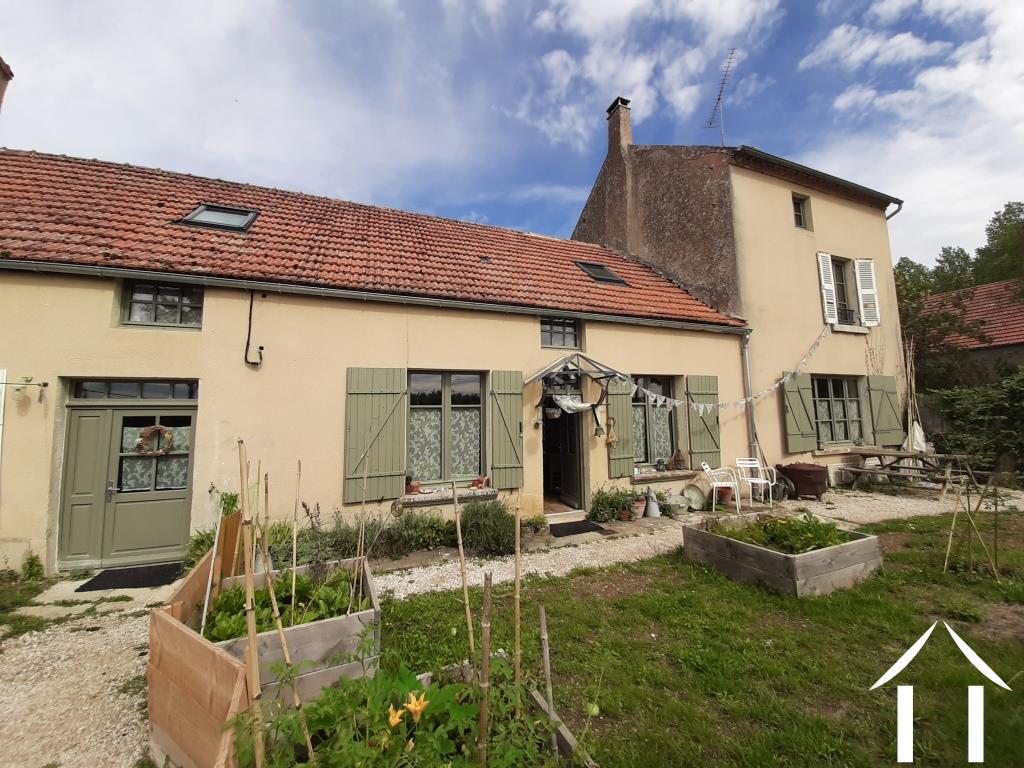 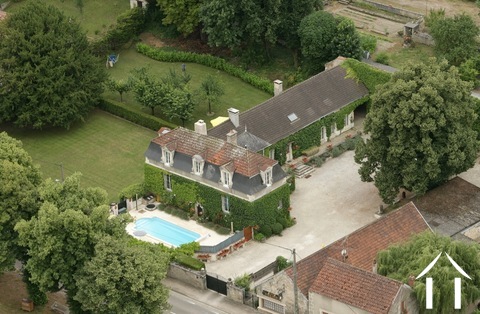 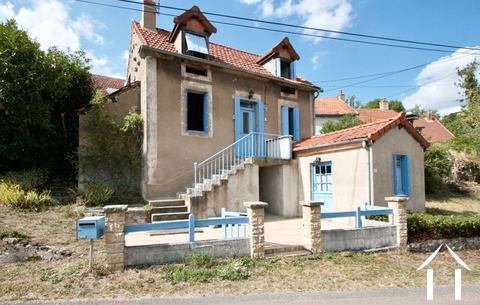 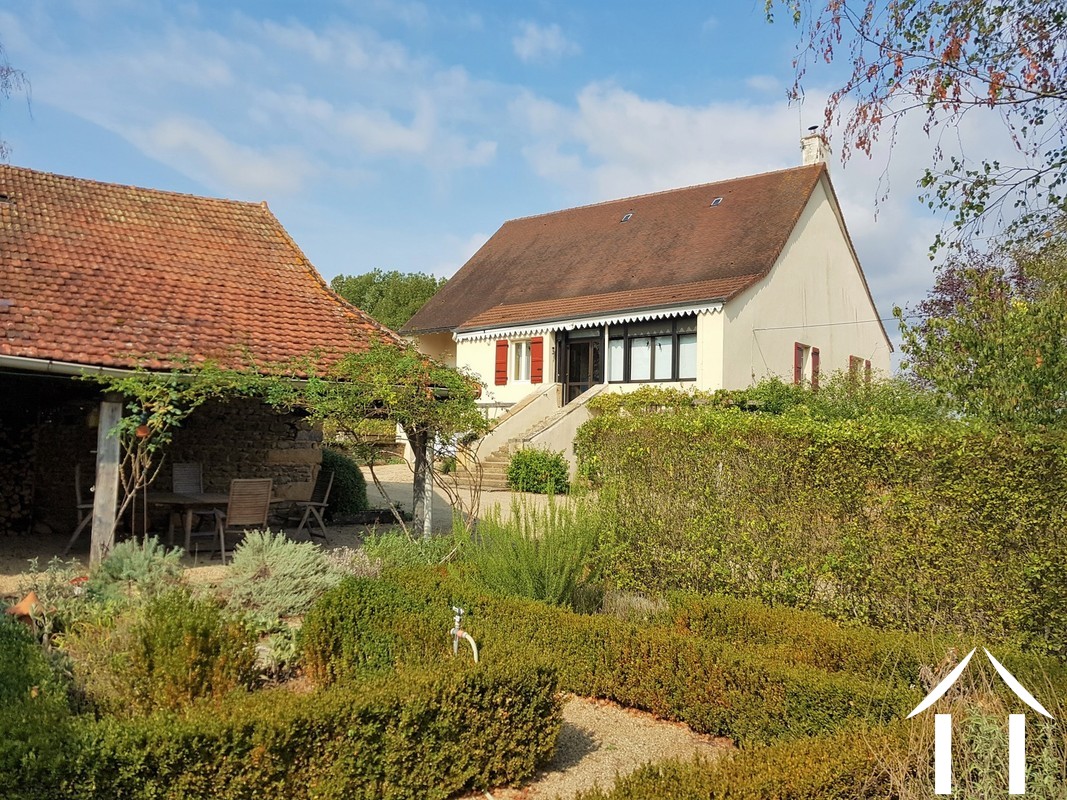 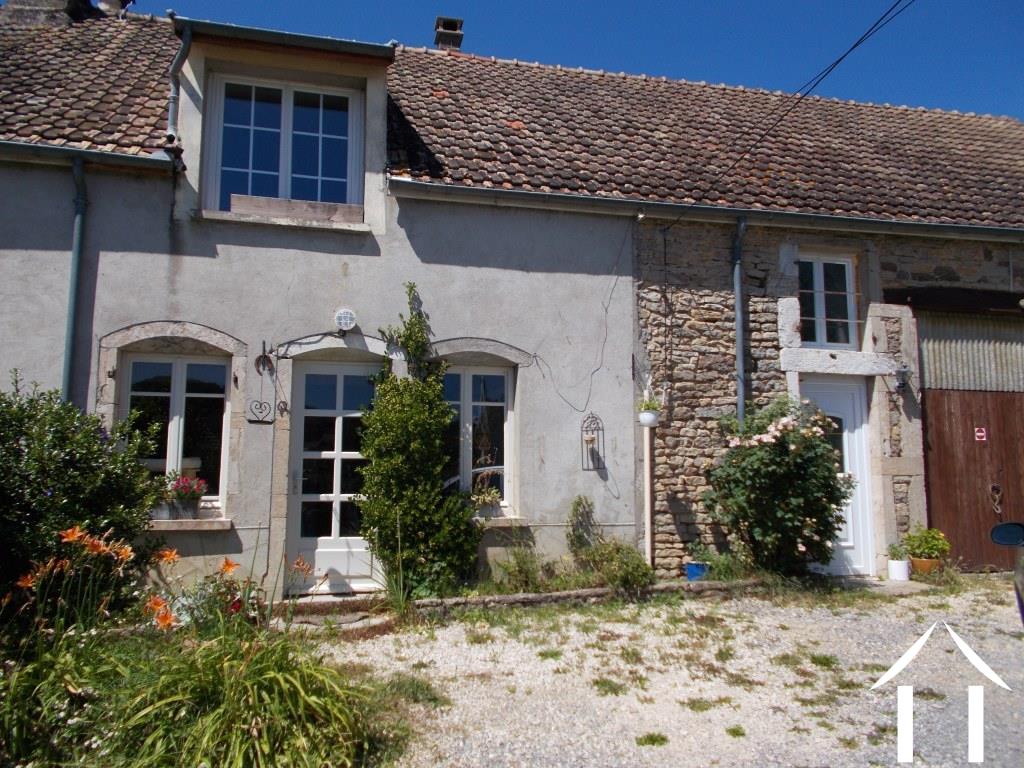 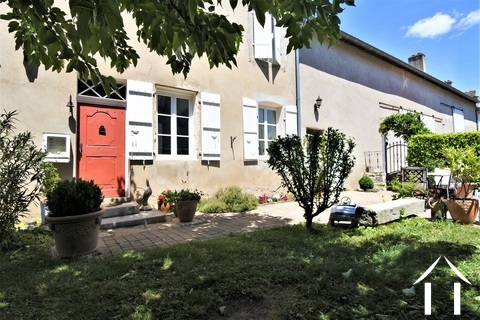 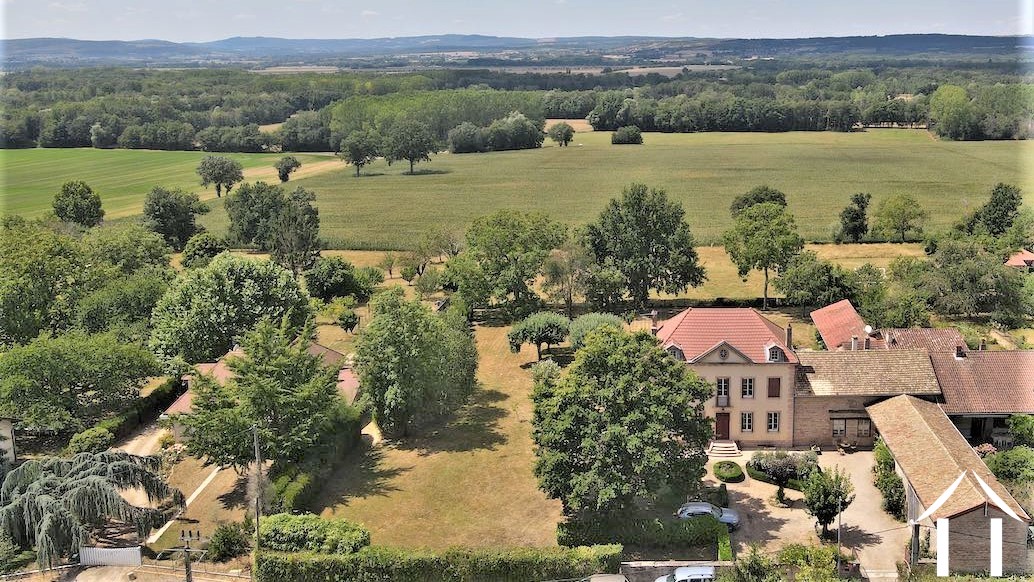 Grand house with a hectare, pool and fabulous views 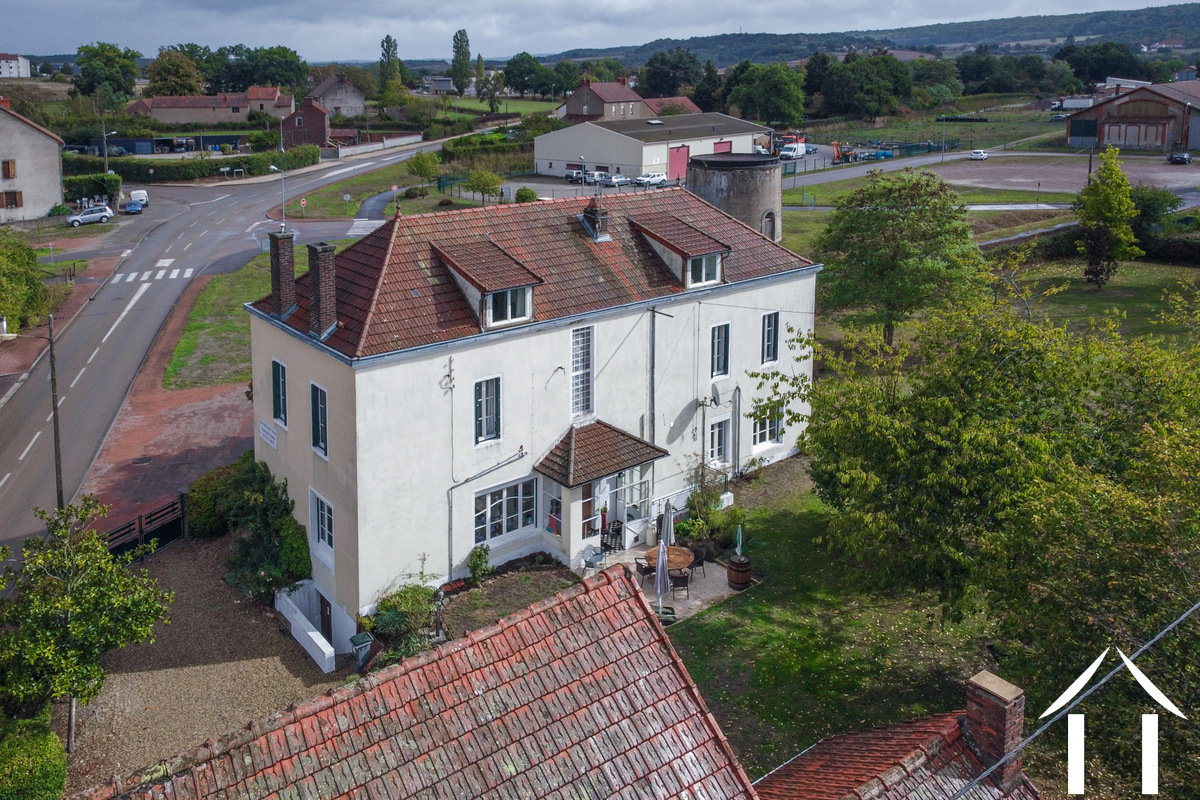 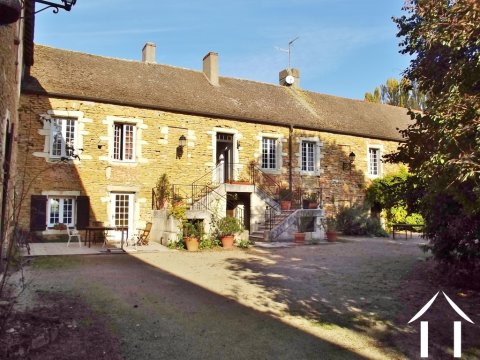 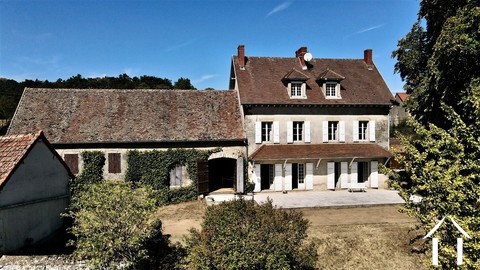 The new and quiet A77 péage motorway comes right into the region, from Paris it is a 2 and half hour trip

There is a direct link between Paris Bercy and Cosne sur loire ( in de Nievre department). At that station are shuttle busses to Sancerre and taxis available. the train trip takes about 2 hours

Orly, the airport south of Paris is at just 2 hours by car.